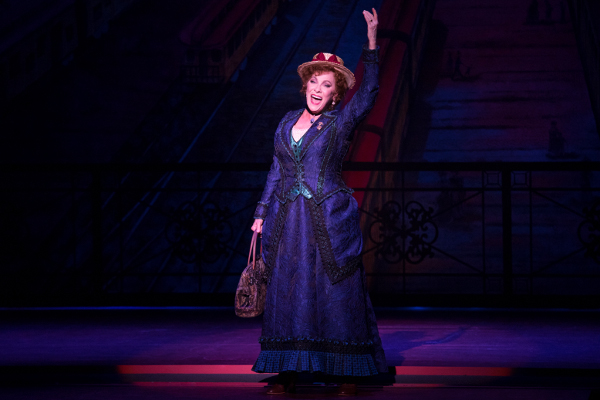 REVIEW: Hello, Betty! Greenville has been Waiting for You!

These are the icons we associate with that indelible, vivacious matriarch and matchmaker Dolly Gallagher Levi over the decades since Thornton Wilder’s farce was turned into a musical play that held the record for the most Tony awards for 37 years.

And the audience at the Peace Center knew they had royalty in the house as the national tour of the decadent classic “Hello, Dolly” finally stopped in Greenville Tuesday evening after none months on the road with the one-and-only Betty Buckley.

New York Magazine doesn’t call her “the voice of Broadway” for nothing. Known for her early work in television (“Eight is Enough”) and film (“Carrie”), and her Tony-winning turn as Grizabella in “Cats,” as well as replacing Glenn Close in “Sunset Boulevard,” Buckley is a bonafide star, and “Hello, Dolly” is a nothing short of a star vehicle.

From her innocuous and unexpected entrance among the residents bustling on a busy 1895 New York street to that highly-anticipated titular number set at the top of the stairs of Harmonia Gardens, the most luxurious and expensive restaurant in all of New York, Buckley had not only a troupe of dancing waiters at her beck and call, but also nearly 2,500 people under her spell with a partial standing ovation (encouraged by Buckley who even took a bow at one point).