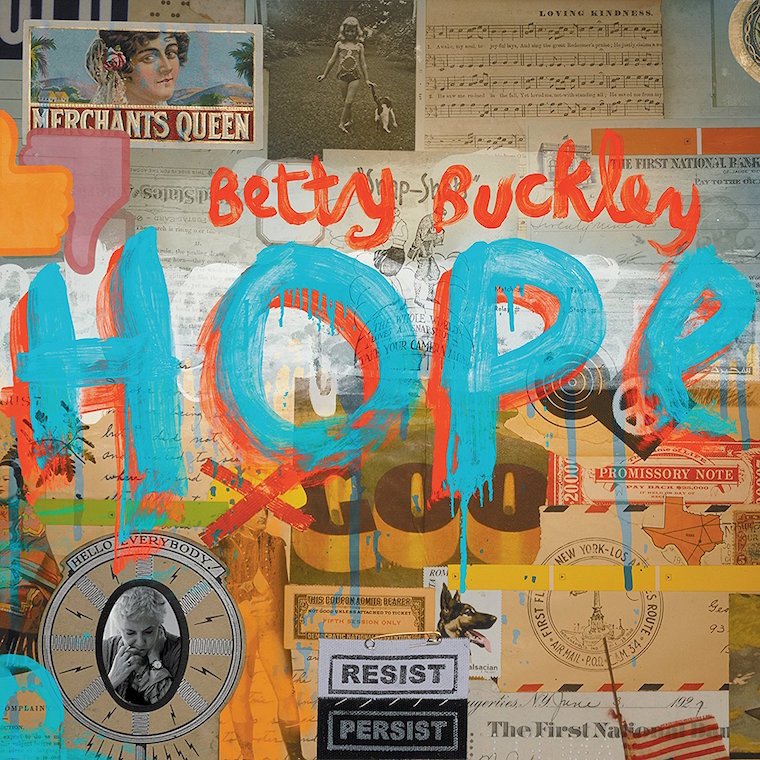 The slightly restless sonic soundscape of ‘Ecotopia’ signals that this won’t be the usual night of standards by a typical Broadway chanteuse, but Betty Buckley has always been much more than that. Never content to tread the same old boards, she tries death-defying vocal aerobics and challenging interpretations of songs she loves, story songs in which she believes. If you’re brave enough to come along for the ride, the rewards are rich and ample. She’s also got a backing band that does justice to her wide-ranging selections, as evidenced in that opening piece of evocative, contemplative and deliciously moody music. The only way to find hope is to go through some dark places, and dark places have always inspired some of the best songs.

She kicks things off with the ambivalent ‘Any Major Dude Will Tell You’ in which she struts the stage in her high-heeled black boots and enough swagger to knock out any Scoundrel-in-Chief; clearly, Ms. Buckley came to slay, and we came to swoon. More than just telling a story with music, Buckley absolutely inhabits her songs, evidenced by moments when she was clearly moved – and we are moved in return.She has mastered the art of connecting to an audience on an emotional level and at such times, as in the transcendent and exquisite ‘Chanson’, she manages to turn Joe’s Pub into a church, stilling the bustle and holding the room absolutely rapt at this wonder of an artistic vessel. (A simple ‘Mmm-hmm’ near the beginning of Lisa Loeb’s gorgeous ‘Falling in Love’, a throwaway sigh that might be barely noticeable if sung by anyone else, is given a world of emotion in Buckley’s heartbreaking reading.) Complemented by a band that seems to have an innate understanding of Ms. Buckley’s wide-ranging musical skills and styling, the evening is anchored by the brilliant Christian Jacob, whose intuitive arrangements and piano work prove a marvelous extension of Buckley’s own musical instincts.

The hymn-like ‘Hope’ by Jason Robert Brown is the centerpiece and elegiac heart of the show, an antidote to our ever-dimming world, even as it struggles with its primal ambition: how does one find hope in such a world?

‘I COME TO SING A SONG ABOUT HOPE

I’M NOT INSPIRED MUCH RIGHT NOW

I CAME OUT HERE TO SING A SONG

SO HERE I GO

I GUESS I THINK THAT IF I TINKER LONG ENOUGH

ONE VERSE IS DONE, THE WORK’S BEGUN’

In a year in which so many have been left hopeless, the mere act of trying, of getting up and getting dressed is its own act of rebellion and resistance, its own form of fighting back. When one looks back upon Buckley’s astounding career, and the many curves and unlikely roads it has taken, it is clear she knows of what she sings. When she pauses, and Mr. Jacob’s piano work carries Mr. Brown’s sweet sounds and melancholy lyrics across the night, it is a moment of delicate bittersweet joy. This is the Artist, come to grieve, and come to heal. She didn’t even need to explain; every person in that room understood.

Now more than ever, Buckley’s message that no one is better, or, more importantly, less than anyone else informs her shows in ways that belie the multiple standing ovations she gets throughout the evening. That may be the essence of the ‘Hope album: honoring the experience of everybody. It’s there in the characters she brings to life, and the way her own life experience in turn informs her performance. It is, in essence, the very purpose of art. To resonate. To reveal. To connect.

That kind of connection begins with the close-knit group of musicans she has assembled. They are tightly in tune with her rollicking journey here, and each gets a little spotlight at some point in the evening. The most glorious moments, however, may be when everyone is working together in rockers like ‘Don’t Take Me Alive’, when all cylinders are firing away with locomotive-like might. It as at such times that the driving drums of Dan Rieser, the slinky fluid bass of Tony Marino, and the rapturous rock-star licks of guitarist Oz Noy coalesce with Jacob’s piano genius, finally getting their chance to let go as in the rousing ‘I Feel Lucky’. A difficult but wondrously-executed take on Paul Simon’s ‘Quiet’ demonstrates the trust within this group of musicians, with Buckley’s voice soaring over the meditative lyrics.

A touching memory of Gilda Radner sets up a moving version of ‘Prisoner in Disguise’ and she brings the audience through the heartbreak and loss with a brittle bit of beauty and a delicate balm of soothing vocals. Maybe that’s where we will find the hope that sometimes feels so elusive these days: in the way we share with each other, in the same way Buckley has shared her voice and her talent over the years.

Rather than keep it dangling there, however, she offers a coda of release and relief, and a wink at what happiness might just yet come. ‘Young At Heart’ was the requisite encore, and a neat nod to where she is heading. As she prepares to embark on a much-anticipated U.S. tour of ‘Hello, Dolly!’ Ms. Buckley ends on a positive and nostalgic note, a blissful ending to an evening of musical enchantment.When it dawns on her that she won’t be playing Joe’s Pub for a while, she pauses wistfully in the realization, and some of us felt the slightest twinge of sadness that there won’t be a fall show this year. But sometimes it is best to share such wonderful talent with others, to spread the message of hope that she so expertly managed to capture, if just for a night, with the sheer happy exuberance of doing what she loves and doing it so well. It is only fair for her to take that joy on the road, across a nation that needs it like never before.

Besides, a meadowlark sings best when she is free.