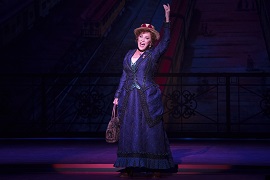 Betty Buckley was clearly enjoying being at home on her Texas ranch, an hour west of Fort Worth, during a recent week off from the national tour of “Hello, Dolly!”

“I just drove in from the airport and I’m very happy to be sitting in my favorite chair,” explained Buckley by telephone. “I haven’t been home in a while so I’m glad to see all my animals, although some of them are looking at me like, ‘Where have you been?’”

If they really want to know, the Tony Award winner – who has rescued many animals over many years – has been on the road since last October, starring as matchmaker Dolly Gallagher Levi in the iconic Broadway musical which she’ll bring to the Citizens Bank Opera House in Boston on Aug. 13 for a two-week run.

With music and lyrics by Jerry Herman and a book by Michael Steward, based on Thornton Wilder’s 1938 farce “The Merchant of Yonkers,” later retitled “The Matchmaker,” the original Broadway production of the musical opened at New York’s St. James Theatre on Jan. 16, 1964.

It went on to win a then-record 10 Tony Awards, including Best Musical and Best Actress in a Musical for Carol Channing, running on Broadway until 1970. The show was revived in 1975, with Pearl Bailey as Dolly, and in 1978 and 1994 with Channing resuming the role.

A Tony Award-winning 2017 revival, on which the current tour is based, starred Bette Midler – with Donna Murphy spotting her on Tuesday nights – and later Bernadette Peters as the matchmaker determined to find someone for the “unmarried half-a-millionaire” Horace Vandergelder of Yonkers.

“The first ‘Hello, Dolly!’ I saw was a regional theater production at Casa Mañana in Fort Worth. And when I was 18, on vacation in New York, I saw Pearl Bailey in it on Broadway.

“I loved her, but I didn’t understand the story and I definitely did not understand what all the fuss was about. It just seemed like another big, old-fashioned musical comedy to me. And I was interested in being a dramatic musical actress,” says the Texas native.

“The next time I saw it was in 2017, just before the Tony Awards where the show won for Best Revival of a Musical, and Bette Midler won for Best Actress in a Musical. I’d never seen anything like it. I was blown away by Bette, by the rest of the cast, by Jerry Zaks’ direction, and by Warren Carlyle’s choreography.

“Bette was such an amazing Dolly, I was gob-smacked. The production was so sumptuous and beautiful. My brother was with me and I turned to him and said, ‘Oh my God, this is incredible.’”

“It was one of the most glorious things I had ever seen in musical theater. It was such a faithful adaptation of ‘The Matchmaker’ that I think I finally understood it,” said Buckley. “I started crying at ‘Put On Your Sunday Clothes’ and wept all the way to the end. I was in a state of pure joyous rapture.”

Buckley was also very happy when she heard from her agent that Scott Rudin – the first producer ever to win an Emmy, Grammy, Oscar and Tony Award – wanted her to star in the national tour of his production of “Hello, Dolly!”

“I flew to New York to meet with Scott Rudin and with the director, Jerry Zaks. They were both so great to me. Jerry taught me the whole new skill of antic comedy. And Scott agreed to let me take my three dogs – Shih Tzus Pippa and Zooey, and Malawa Shepherd Lucas, a protection dog – on the tour.

“My assistant, Cathy Brighenti, and her dog, a Shepherd–Lab mix, are also out with us,” said Buckley, whose two cutting horses, two cats, and donkey – named Rosie O’Donkey – remain home on the ranch. “It’s no easy feat traveling with dogs, but it’s worth it because they provide a sense of home on the road.”

Over the years, Buckley’s performances have provided audiences a sense of excitement on stage, film and television.

Beginning in 1969, just after relocating to New York City, she landed the role of Martha Jefferson in the original Broadway production of “1776,” following that up by replacing Jill Clayburgh as Catherine in “Pippin.”

Buckley gained further recognition in 1977 when – following the death of Diana Hyland – she joined ABC-TV’s “Eight Is Enough” as Dick Van Patten’s character’s second wife, Abby Bradford. Her more recent television credits including a recurring part on HBO’s “Oz” and a regular role on the current AMC series “Preacher.”

By 1982, the versatile performer was back in New York, originating the role of Grizabella (“Memory”) in the Broadway production of “Cats” and winning the 1983 Tony Award for Best Performance by a Featured Actress in a Musical.

Buckley, who had played the gym teacher in the film version of “Carrie,” played the mother when the Stephen King story was adapted for the Broadway stage as a musical in 1988.

A starring role in a second Andrew Lloyd Webber show came her way in 1994 when she replaced Patti LuPone as Norma Desmond in the London production of “Sunset Boulevard,” and a year later when she followed Glenn Close in the role on Broadway.

It isn’t lost on Buckley that taking on the starring role in “Sunset Boulevard” and now “Hello, Dolly!” has put her in heady and sometimes headline-making company.

“The internet was relatively new and social media was non-existent when I did ‘Sunset Boulevard,’ but there are internet discussions out there today still asking ‘Who’s your favorite Norma Desmond?’

“It doesn’t affect me, however, because the concept of competitive divas is not one I believe in. Just because you play a diva doesn’t mean you are one,” said Buckley with a laugh.

“I knew I’d be compared with the other Dollys. That’s fine, though, because doing this show has been so much fun and so good for me.

“I’ve lost weight and I’ve gotten my Broadway voice back,” says Buckley, who will say “so long, dearie” to the “Dolly” tour at the end of the Boston run before resuming her concert schedule this fall.

“Dolly is such a radiant being. Playing her on tour, and getting the opportunity to connect with people all over the country, has been a completely joyous experience. I’m now ready, though, physically and emotionally, to hang up my feathered headdress and head home.”