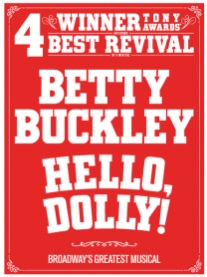 Followers of comedy musical theatre must surely be in heaven. This week sees the opening of not one but two professional, high-production value comedy musicals in the valley, both from the same era, both with a nostalgic turn-of-the-last-century setting and both from the showbiz school of they-don’t-write-’em-like-that-anymore musicals.

The second production we’ll get to later in the week. The first is the Broadway behemoth Hello, Dolly!, the musical that literally begs its leading lady to promise she’ll never go away again. And she never has. Since winning 10 Tony Awards after the show’s 1964 opening, Hello, Dolly! has endured revival after revival, along with countless dinner and community theatre productions, not only across the country but also around the world.

Originally designed as a star vehicle for Ethel Merman (who turned it down, but eventually played the lead some six years later in 1970), the widowed Dolly Levi quickly became the signature theatrical role of Carol Channing’s career. Casting powerhouse Bette Midler as the bold, brassy, meddling matchmaker in the 2017 revival was inspired.