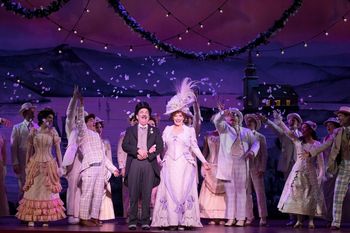 Cleveland is the official starting point for the new national tour of Hello, Dolly!, scheduled to travel through August 2019. The production is based on the recent smash hit Broadway revival initially, and finally, starring Bette Midler, with Bernadette Peters appearing in between.

Betty Buckley’s name is above the title for the tour; she is the lead, the title character, and you know she is going to dominate this beautiful production of an American favorite. When Buckley made her first entrance, stepping from the train and standing center stage, the audience in the Connor Palace stood and cheered. She knew she was where she belonged, with a loving audience.